Which Kind of Milk Should You Choose for Coffee? 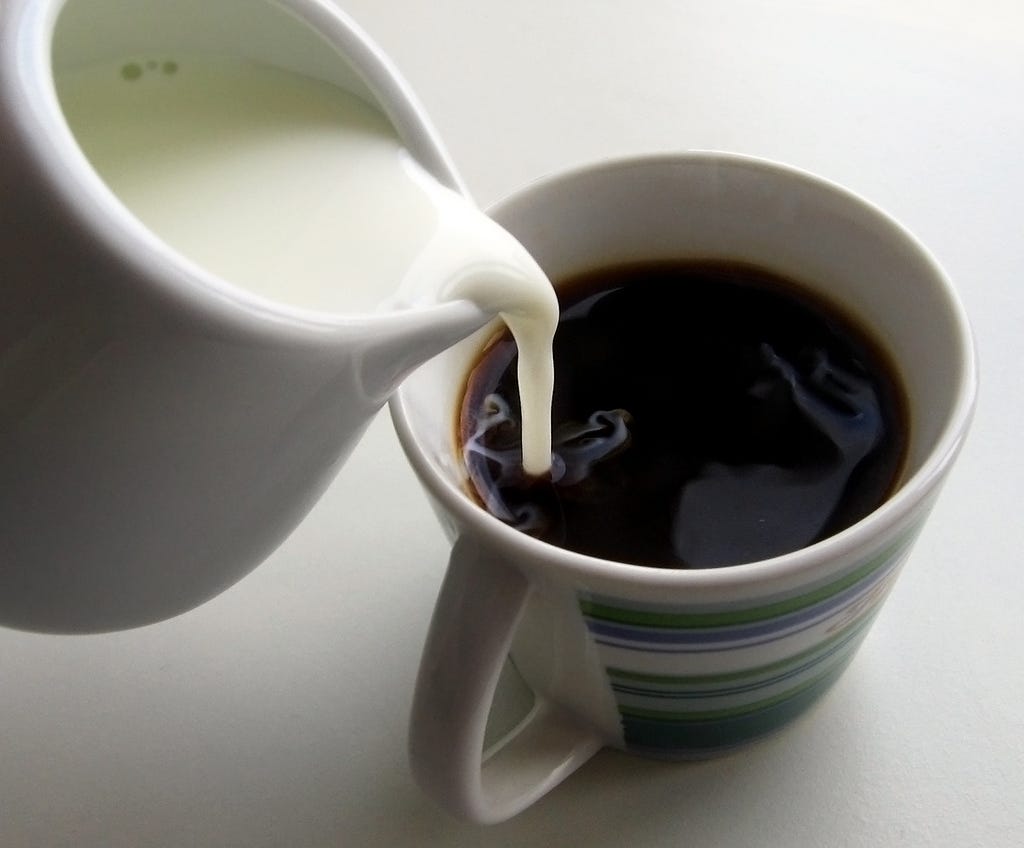 There are fewer culinary duos more dynamic than coffee and milk. The balancing of flavors, the added nutritional benefit, or even the entrancing visual of coffee and milk blending together should be enough to convince any skeptic of the coffee-milk matrimony. Dare we say it’s an even more perfect pairing that peanut butter and jelly?

Milk is often an overlooked aspect of creating a delicious coffee concoction. But for lattes, cappuccinos and a range of other dairy-infused coffee beverages, milk makes up more than half of the drink. There are many more factors to consider than just whether or not the milk is past its use-by date. Where milk comes from, its chemical content, flavor and texture all matter for the quality of a coffee beverage.

Take it from a barista champ. Lem Butler, the 2016 U.S. Barista Champion and Urnex Ambassador, intimately understands the importance of sourcing the highest quality milk available to use with a world-class coffee. Before competing in the 2016 World Barista Championship in Dublin, Ireland, he sought the recommendation of Colin Harmon, the 2009 Irish Barista Championship, to seek out the best local and organic milks Ireland had to offer.

“Finding the right milk is crucial for competition,” Lem said. “I personally look for a milk that best promotes what I enjoy in coffee, sweetness, and the coffee has to highlight what I find delicious in steamed milk, also sweetness. Sweet and creamy has a great flavor balance with coffee.”

The Science of Milk 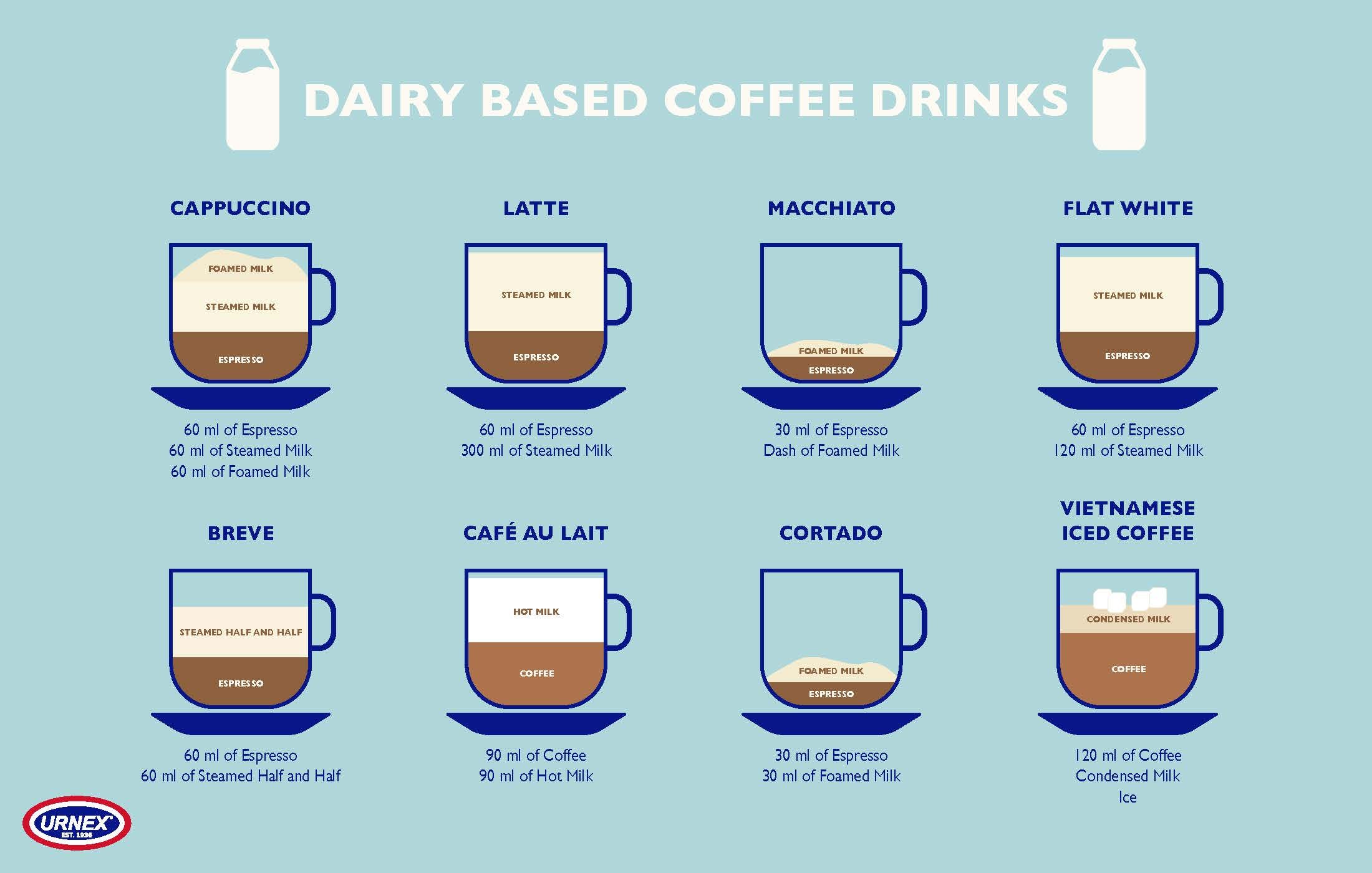 Whether or not certain types of milks are compatible with coffee depends almost entire of the milk’s molecular makeup. Not a chemistry buff? Just look for the two essential elements in milk: fat and protein content.

An important part of milk’s chemistry is a complex combination of fats, called milk fat globules. These globules act as emulsifiers to keep the individual globules from coalescing, as well as to protect them from degradation or oxidation by the enzymes in the fluid portion of the milk. Milk fat globules coat the tongue and inhibit the taste of the coffee, which leads to less bitterness and less acidity compared to a black coffee. This makes milk a perfect complement to a rich, sweet and creamy drink, but a less pleasing addition to a fruity drink.

Another piece of the milk puzzle is two kinds of proteins: whey and casein proteins. The level of protein in cow’s milk is essential in creating tiny bubbles, or microfoam, during heating. And it’s the merging of the milk proteins with coffee globules that highlight the favorable taste characteristics in lattes and cappuccinos. This reaction generates an even better taste when the coffee is hot.

A general rule of thumb in choosing your milk: the more fat that exists in the milk, the richer and creamier it will taste. Which makes whole milk the go-to option for most coffee bars. At about 3-4% fat content, it achieves an ideal balance of taste and texture when mixed with coffee. Whole milk is the barista’s default choice when the consumer doesn’t specific their milk preference.

Reduced-fat milks, like 1% or 2%, lose some of the sweetness and body gained compared to using whole milk. While not a bad option to cut down on fat and calories, a latte or cappuccino made with reduced-fat milk will feel a bit weak and watery in the cup.

Skim milk, which contains little to no fat at all, actually retains some sweetness compared to reduced-fat milk. Because of its even lighter body, it doesn’t add much density to a brewed coffee. But steamed, skim milk creates a drier and denser head of foam, and allows an espresso’s flavor to cut through clearly.

On the opposite end of the spectrum, creams can add a hefty dose of body to a coffee. Ranging from 12% fat in half-and-half, to 38% in a heavy cream, most creams are best suited for small dashes in a brewed coffee, especially in a dark roast. But used as the main ingredient in a latte is akin to eating your morning bowl of cereal with ice cream. 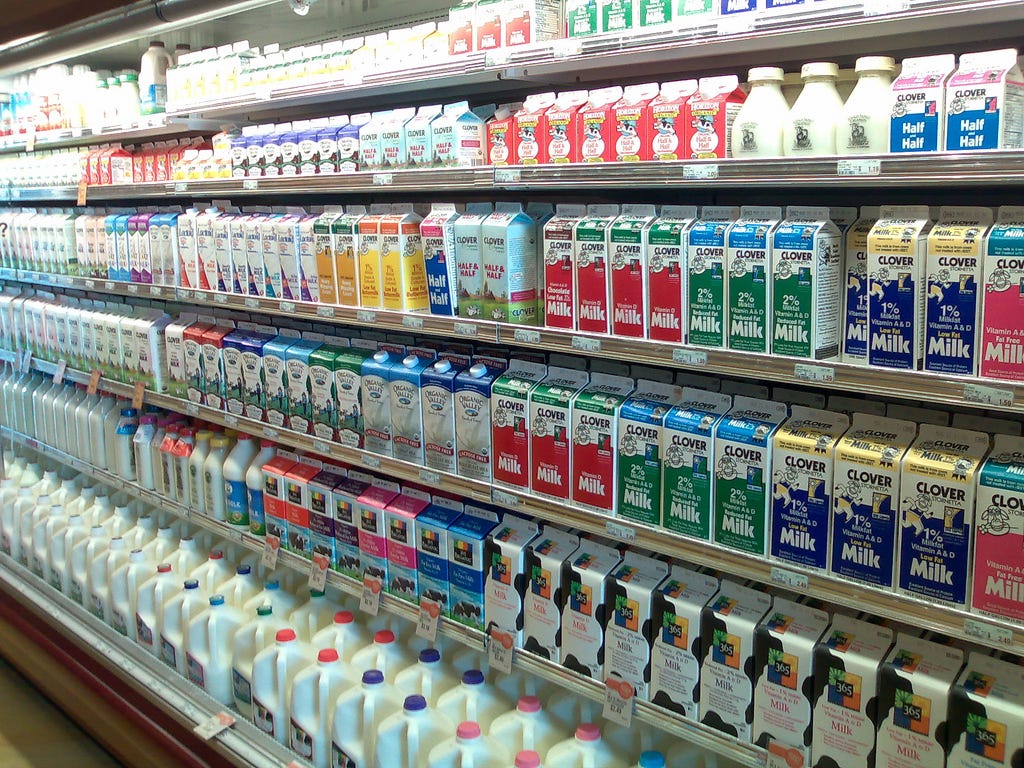 Selecting the right milk for your coffee is all about the balance you prefer, according to this year’s reigning U.S. Barista Champion and Urnex Ambassador, Kyle Ramage. Black coffee has a naturally high acidity level (a pH level of about 4.5), so milk can be used to lower the overall bitterness of coffee.

Kyle coached Lem during his championship season last year, and said he’ll explore local milk options, like Lem did in 2016, for the World Barista Championship this November in Seoul, South Korea.

“Milk is really tough because it can be too sweet and too fatty to the point it covers up the coffee,” Kyle said. “At the U.S. Barista Championship in Seattle, there were a ton of great milks, and we ended up using Sunshine which had the best balance for my coffee. We hope to find that kind of milk at the WBC in South Korea, one that truly helps the coffee.”

When perusing the refrigerated aisle in the grocery store, a shopper’s eye might be drawn to some of the newer, unconventional milk options like soy, rice or coconut milk. But these lower calorie, non-dairy milks don’t have the chemical makeup to create the same taste sensation as animal-based milks. Because these alternative milks contain more water and fewer fats and proteins, its thinner complexion doesn’t have the same effect as animal-based milk to offer a rich, creamy texture when combined with coffee.

However, if you find yourself lured in by the exotic-sounding non-dairy alternatives, here are some of your best bets:

With milk in your coffee, there a clear tradeoff between taste and health. But we all know that the fattier the milk, the healthier it is for the soul. 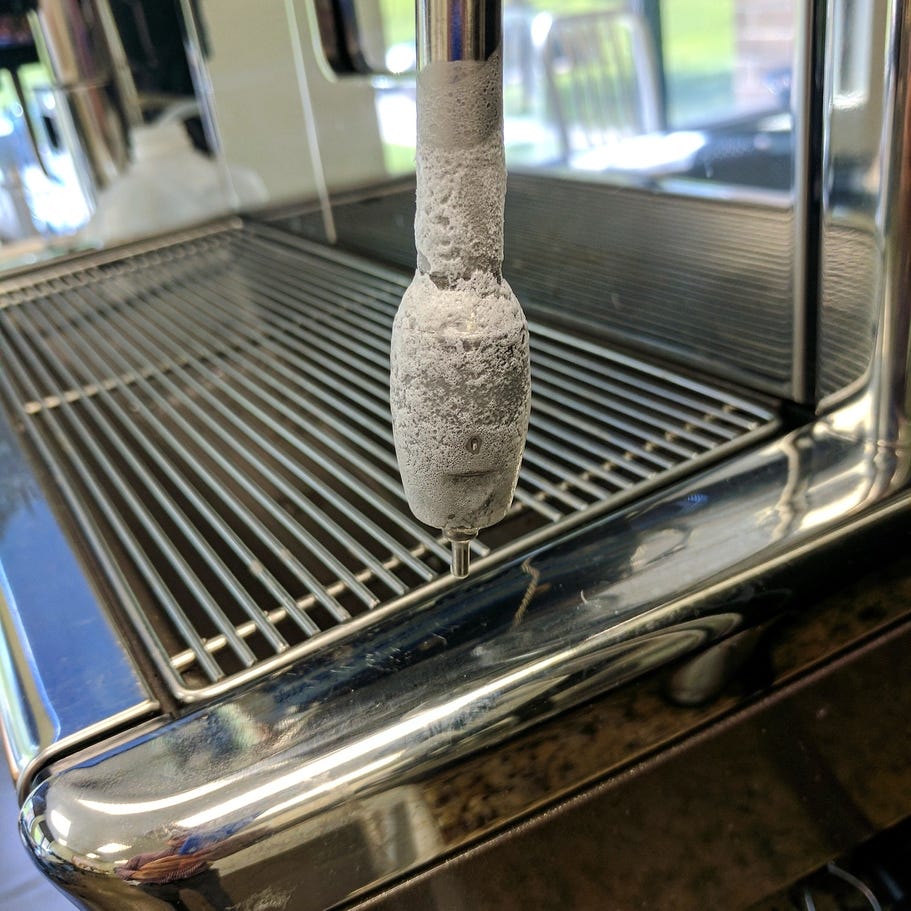 No matter the fat content or origin of your milk, using a dairy cleaner is vital in making safe and delicious coffee beverages. Milk is one of the best sources of nutrition found in food, making it a common breeding ground for unwanted bacteria if allowed to develop on coffee equipment.

For this reason, you might think twice about drinking milk that has been left outside a refrigerator for a couple of hours. Bacteria such as salmonella, listeria and E. coli can develop when left out because room temperature environments encourage the growth of different types of bacteria. The longer milk is left out, the longer bacteria have to multiply and grow.

Now think about the unseen milk residue that has been sitting inside of your coffee equipment. The milk for your latte could be passing through and making contact with old milk in the steam wand, valves and tubes. No level of latte art skills can compensate for rancid milk.

Milk is also one of the trickier substances to clean. Different kinds of coffee equipment have different reactions to cleaner, even when cleaning the same milk. And because milk residue consists of fats, proteins and minerals, it requires a combination of chemicals to completely eliminate it. Alkaline agents effectively break down milk fat and protein, but they do not dissolve minerals. On the other hand, acid agents and surfactants can dissolve minerals as well as protein. 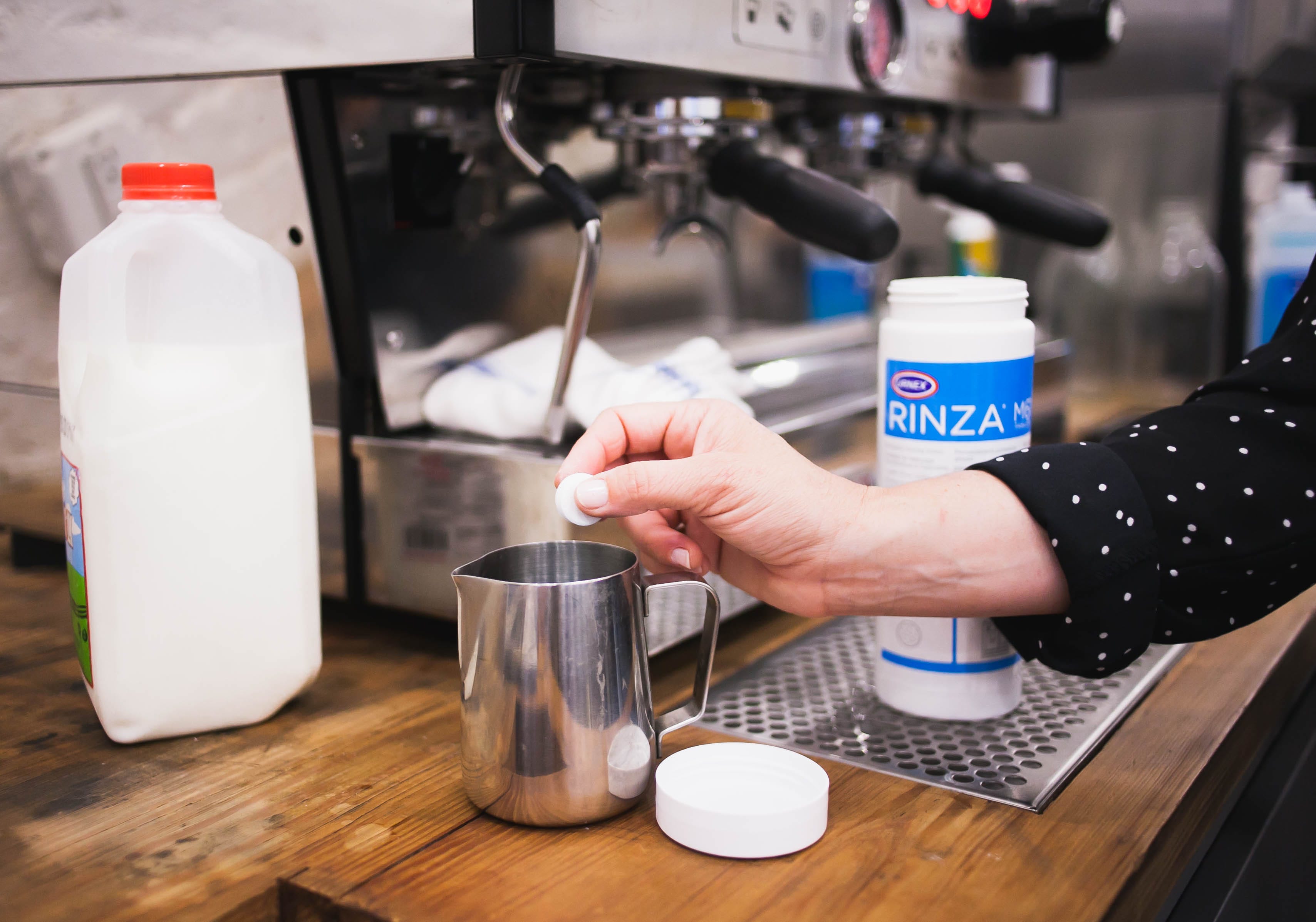