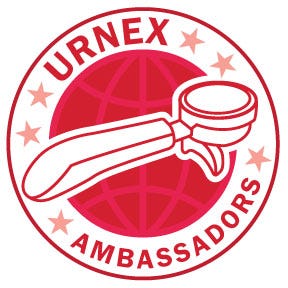 Urnex is excited to announce the latest group of 12 coffee champions participating in the Urnex Ambassador Program. In its third year, the program recognizes and supports the talents and technical expertise of baristas from all around the world.

“Urnex has a long-standing commitment to supporting coffee competitions and an appreciation for the time, resources and energy that baristas dedicate toward participating and excelling in these events,” said Isaac Cohen, Vice President of Marketing at Urnex. “The Ambassador program is one small way we recognize their efforts and help inspire coffee professionals worldwide.”

Over the course of the next several months, the Urnex Ambassadors will participate in activities and events around the world in accordance with the program’s objectives:

Urnex is proud to work with the following talented and passionate coffee professionals this year:

Nisan has been the Turkish Barista Champion for two consecutive years, and took second place in Turkey’s Brewers Cup in 2017. He is an independent barista who runs his own coffee consulting firm. Nisan has been an Urnex Ambassador since the program’s inception in 2015.

Luis finished in third place in the Mexican Barista Competition in 2013 and 2015 before winning the competition this past year. He was coached in his winning effort by the former Colombian Barista Champion, and his mother-in-law, Blanca Bernal. Luis owns the MAS Café espresso boutique and roastery in Puebla, Mexico.

Francesco is the head barista at Ditta Artigianale, which was founded by three-time Italian Barista champion Francesco Sanapo, Francesco’s mentor during his competition training. Prior to winning the Italian Championship this year, Francesco placed third in both 2015 and 2016.

Steven is the founder of The Barista League, which creates events and competitions for baristas that break down barriers to participation and foster connections within the coffee industry. This is Steven’s 3rd year as an Urnex Ambassador.

An Australian expat, Chloe is an independent barista in Berlin, but has worked with local coffee institutions like The Barn and 5 Elephants running master classes and as a consultant. Chloe is also the 2016 German AeroPress champion.

Ben was the Canadian Barista Champion for three consecutive years from 2013 to 2015, and took third place in both the 2015 and 2016 World Barista Championships. He is also the owner of Monogram Coffee based in Calgary.

Kyle has competed across four seasons of U.S. Barista Competitions and three seasons in the U.S. Brewers Cup. This year he was coached by the 2016 U.S. Barista Champion and Urnex Ambassador, Lem Butler. The pair have recently begun a new roasting and retail venture called Black & White Coffee.

A civil engineer by training, Winston is the lead barista, head trainer and wholesale representative for Origin Coffee Roasters in Cape Town. Winston won this year’s South African Barista Championship in only his second year of competition, and is also the 2016 South African Aeropress Champion.

In just his second year competing, Chad followed up his third place finish in the 2016 World Brewer’s Cup competition by winning the 2017 competition this June in Budapest. To prepare for the championship, Chad tasted 150 coffees before choosing a natural-processed Geisha from Ninety Plus Coffee in Panama, which is where he first decided to compete in coffee competitions after participating in the company’s Maker Series.

Niall is the owner of Proper Order Coffee, which was voted Best Coffee in Dublin just five months after the shop’s opening. After first working as a school teacher, Niall found his niche in coffee by applying his chemistry studies to his work as a barista.

Jeremy has been crowned Chinese Barista Champion in both 2014 and 2016. With a background in business, Jeremy runs the Uni-Uni Roasters and Bakery in his hometown of Nanjing and The Sense café in Chengdu.