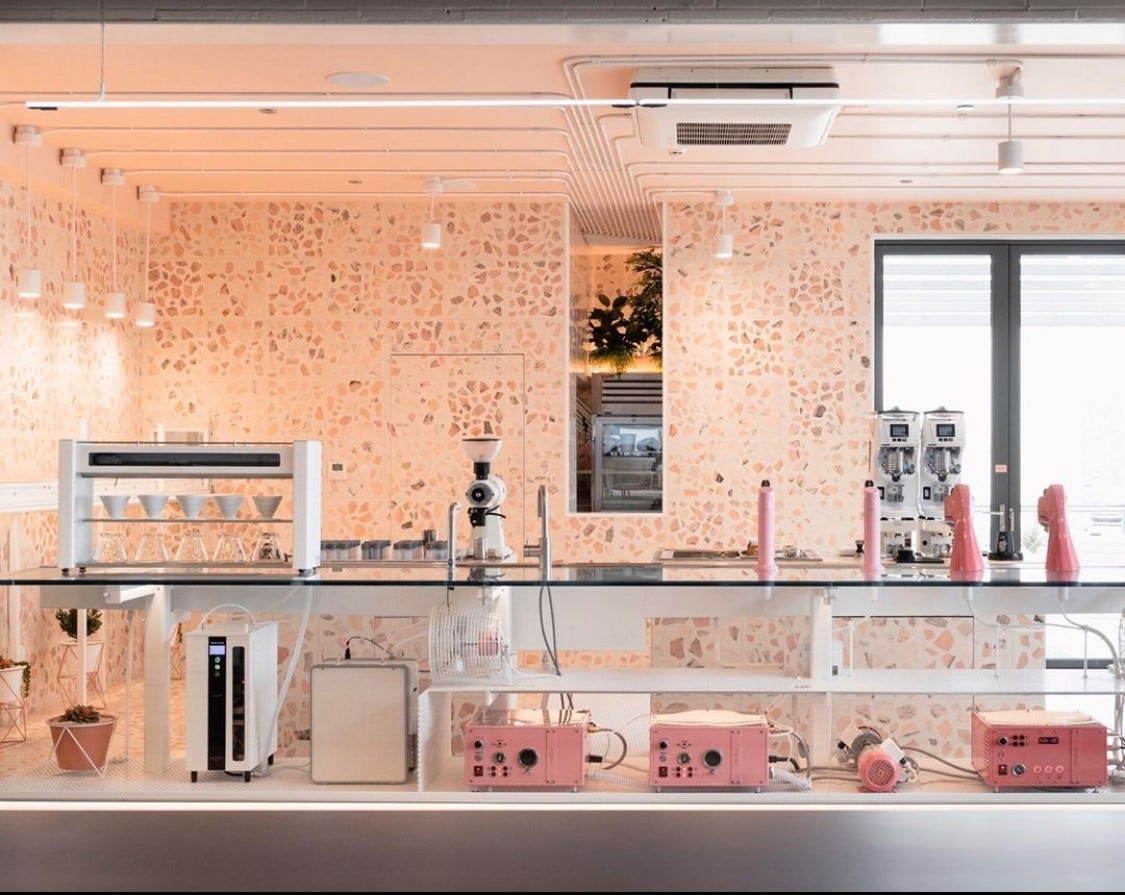 When Andrea and Jon Allen landed an opportunity to open a new cafe inside The Momentary, they decided they were going to push the limit.

The Momentary is a modern art museum located in downtown Bentonville, Arkansas. The building was once a cheese factory and where the cafe was slated to open was the building’s dairy loading dock. So they decided to combine these two opposing forces—modern art and the building’s history—and curate something completely different.

Along with combining design, robotics, and Italian terrazzo tiles to create a space that is a piece of art on its own, they also made the decision to serve oat milk, supplied by Pacific Foods, as their default milk option. In a continued subversion of cafe norms, they also decided to add a dairy tax, adding a dollar if a patron elects to have their drink made with dairy milk. Through these decisions, Onyx has addressed some big sustainability problems—some intentionally, some by happenstance.

Plant milks are often treated as a secondary ingredient—a consolation for people who can’t have dairy. In adopting oat as the default, Onyx hoped to change that perspective.

“We’ve been working towards a point of view on our menus for a while that presents plant based beverages as an ingredient to a drink and not as an ‘alternative’ to milk.” says Andrea Allen, 2020 United States Barista Champion, Urnex Ambassador, and the co-owner of Onyx Coffee Lab. Designating oat—or any other plant milk—as the alternative option means that for many, plant milks are only treated as a secondary ingredient, not as an ingredient that can stand on its own with milk. “The milk alternative concept kind of naturally positions itself as the choice to make if you can’t drink milk instead of something you might experience as a take on a coffee drink.”

Plant milks are generally less harmful to the earth than dairy milk (contributor Sierra Wen Xin Yeo details the differences in plant based milks here). Dairy milk emits 3.2 kilograms of carbon dioxide per liter versus 0.9 kilograms for oat milk, and uses 628 gallons of water versus 48 gallons for oat (these findings come from a study done by researchers for Science, but is clearly illustrated in this interactive graphic from the New York Times that relies on their data).

Although this information is readily available and generally understood by most people—most people could likely articulate that plant milks are better for the environment than dairy milk—plant milks still have the hurdle of being treated as “alternatives.” “I really think that approaching it as an ingredient in drinks and not as a ‘special alternative’ is key,” Andrea says. “I think that many cafes I see still tend to approach plant based milks as an option but maybe not a default. I would love to see some places defaulting to plant based because I think it's a natural evolution for coffee.”

Andrea estimates that about 90%  of drinks at Onyx’s Momentary location are made with oat milk. Although customers are aware that oat is the default, it’s not often talked about and most customers are happy with their drinks. “The options are always tricky because I feel like leading with a, ‘okay just so you know our drinks here are XYZ,’ can set a customer up for a kind of weird expectation,” Andrea says, noting that she thought extensively about how to present oat milk in the cafe in order to make customers comfortable. “We ultimately decided to just take orders as they came and just have Oat as the default with no questions asked or no explanations given. It’s worked pretty well.”

Onyx made a conscious choice to serve a milk that was more sustainable than traditional dairy options—the environmental impact of dairy milk was clear. What was surprising was the other ways switching from dairy to oat helped save energy and labor and promote sustainability.

For the most part, Onyx’s Momentary location operates on a single fridge for milk . Because oat milk is shelf-stable, there’s no need to invest in costly refrigerators that eat up energy. “The ordering and delivering is so much easier!” Andrea says. “We only use a couple cases of cow milk at The Momentary per week versus upwards of 25 cases of milk per week at our other stores.” Restaurants and other food establishments use lots of energy, and on average, 44% of the energy used in a restaurant is occupied by refrigeration needs.

Although a seemingly small task, putting away dairy milk and maintaining inventory for perishable items can be costly. “Receiving the milk order is like a scheduled event at the other shops because we have to very quickly unload to maintain temperature, have to try to send the crates back with the dairy, etc…” Andrea details. Ordering dairy milk has to be precise since it will go bad, while oat milk can be stored for months without refrigeration. Baristas don’t have to be as precise ordering oat milk—and don’t have to rush away from customers to quickly put away an order. “Oat milk can be set in the receiving area and then put away as we are able.”

The benefits of switching from dairy milk to oat are clear, and Andrea hopes Onyx’s model inspires people to be creative. Onyx’s choice to implement oat milk as a default is both tangibly more sustainable but also represents an attitude shift towards what’s possible within coffee shops. “I want to see shops continue to diversify from one another,” Andrea says, “so that we can continue to reinforce to the coffee consumer that coffee is the most complex beverage and use that as a jumping off point to discuss all of the work still left to do in the industry.”

Ashley Rodriguez is a writer and host of the podcast Boss Barista. She writes about workplace equity and employee empowerment in her weekly newsletter.
Related Articles