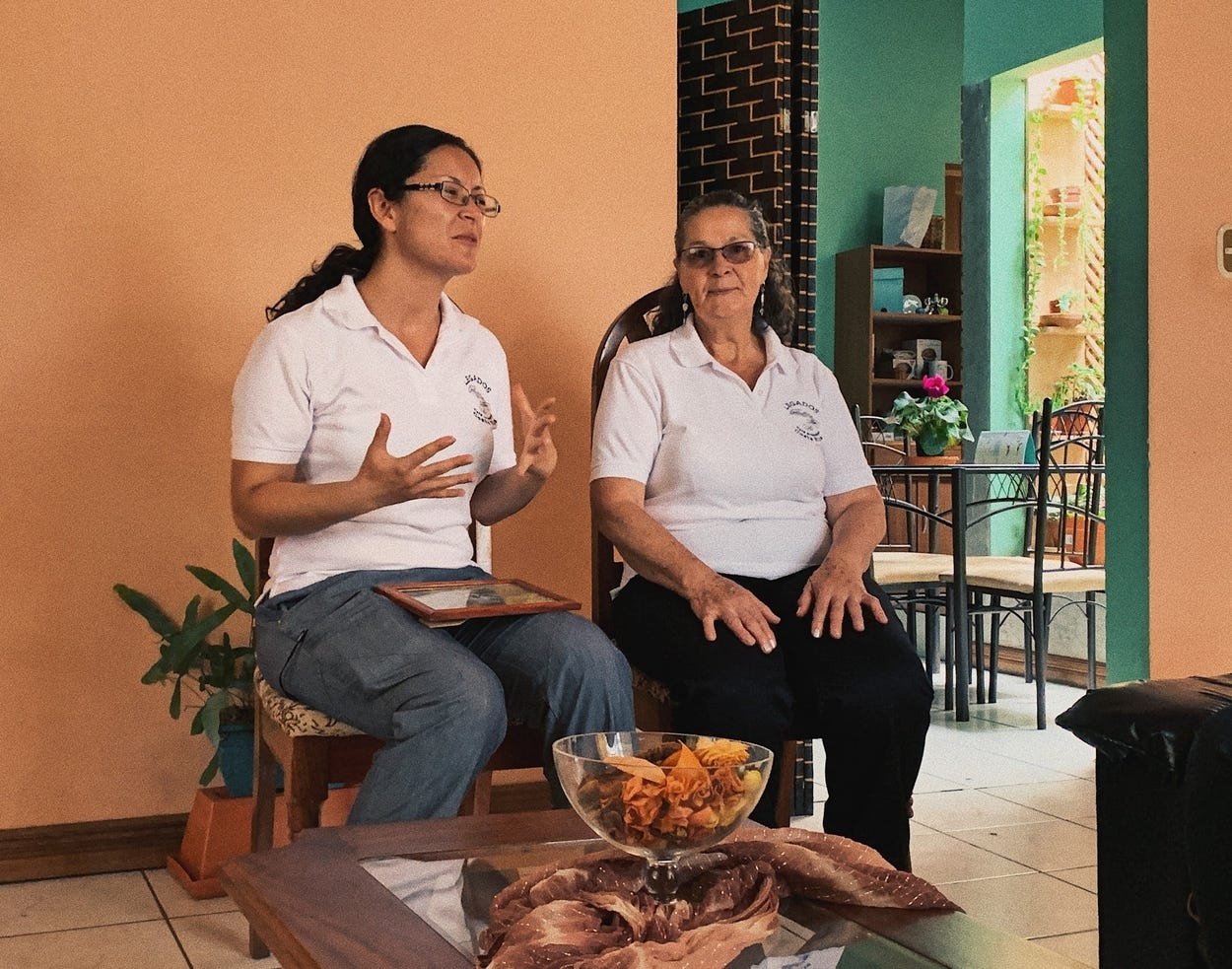 In Part I of this series, I introduced the cultural backdrop for Taty Vargas’s and Leda Navarro’s story, and how they came to inherit the family farm from father and husband, Gerardo, after his fatal battle with cancer. Here, we’ll touch on their journey of taking control of the farm, attitudes surrounding their decision to be pioneers in their community, and their individual transformations over the last three years. And how all these add up to ensuring sustainability of the coffee industry at origin for years to come.

I traveled to Leda’s and Taty’s farm called Legados in Tobosi, Cartago with Bean Voyage, a non-profit organisation that currently serves 67 female producers in various regions across Costa Rica. Bean Voyage works with female producers of all ages, which makes for interesting intergenerational dialogues between experienced producers, like Leda, and the younger guard, like Taty, who are starting to push back vocally about leveling the playing field for young female producers.

One of the reasons why organisations that champion females in production are so important is because there is a lack of womxn involved in farming, and therefore a lack of mutual support for each other. Taty and Leda reaach out to Bean Voyage of their own accord, both to support themselves and to gain a sense of community through their weekly meetings and larger events.

“There are not many women in the region that’s involved in coffee farming as we are,” Leda said over dark, sweet cafe de chorreador, postres, and arroz con leche. “There is one neighbor that’s widowed as well and has a very small piece of land. But she doesn’t go beyond picking cherries and selling it to recibidor (cooperative/company). Not sure in other parts of the country, but not many here in the region.”

It doesn’t come as a surprise, then, that the community assumed that Taty and Leda would relinquish ownership of Gerardo’s farm after his passing. Male heads of household were almost certain to lead any agricultural production, and without one in the family, the community didn’t see a path forward in which two womxn took charge.

“At the beginning, when we started working on the farm, many people were surprised,” Taty said. “When they saw that we managed to improve the appearance and productivity of our coffee plantation, we received some positive comments, they told us that we were very brave.” 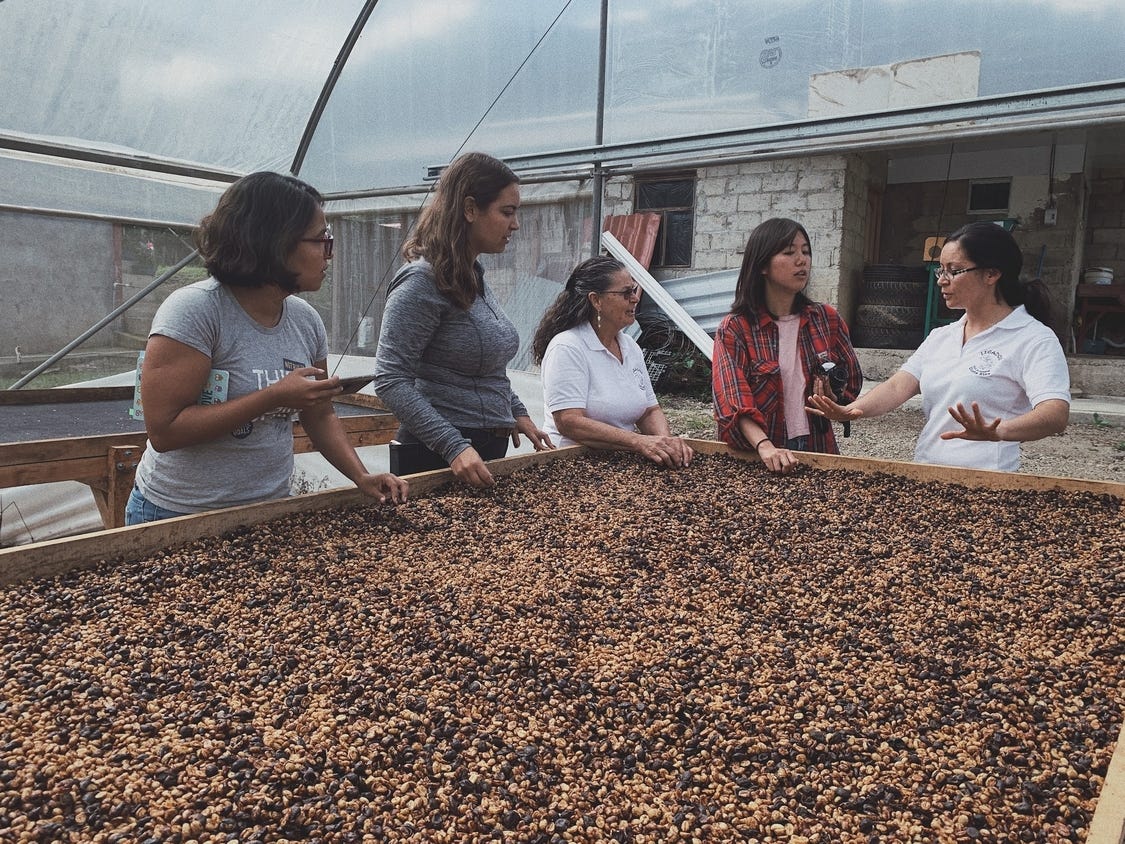 In considering Taty’s qualifications, it’s clear to see how humble she is about the improvements and innovations she’s brought to her father’s plot. Though it’s a modest three hectares, El Monte (The Mountain) stands at 1400-1800 meters above sea level and has a variety of stunning catuai and caturra. Taty is working to systematically introducing new varieties, such as SL-28, previously unheard of in the region. She also plans to integrate new styles of irrigation and a system for phasing out the oldest trees on the farm.

“During the first year (2017), the objective was to increase the productivity of the farm,” Taty said. “I carried out an analysis to find opportunities for improvement in different agronomic aspects: fertilisation, disease control, pruning, and shade management.”

Taty has also built her own micromill behind the family home, and has had it certified by ICAFE, Costa Rica’s national coffee governing body. The beneficio (micromill) was a dream of Gerardo’s before his passing, and Taty decided to build it to honour him, injecting her own vision into the design. After meticulous planning and consultation, Taty and Leda opened their micromill in January 2019.

During her second year running the farm, Taty educated herself on a variety of topics centered around the farming business. She visited beneficios in Tarrazú and Naranjo regions to learn more about those projects. She also attended national coffee fairs and even took a barista course.

But running their own enterprise, including a new team of workers, is no easy feat for Leda and Taty, especially during the harvest season. The duo generally works 12-hour days, not including the housework and administrative tasks. 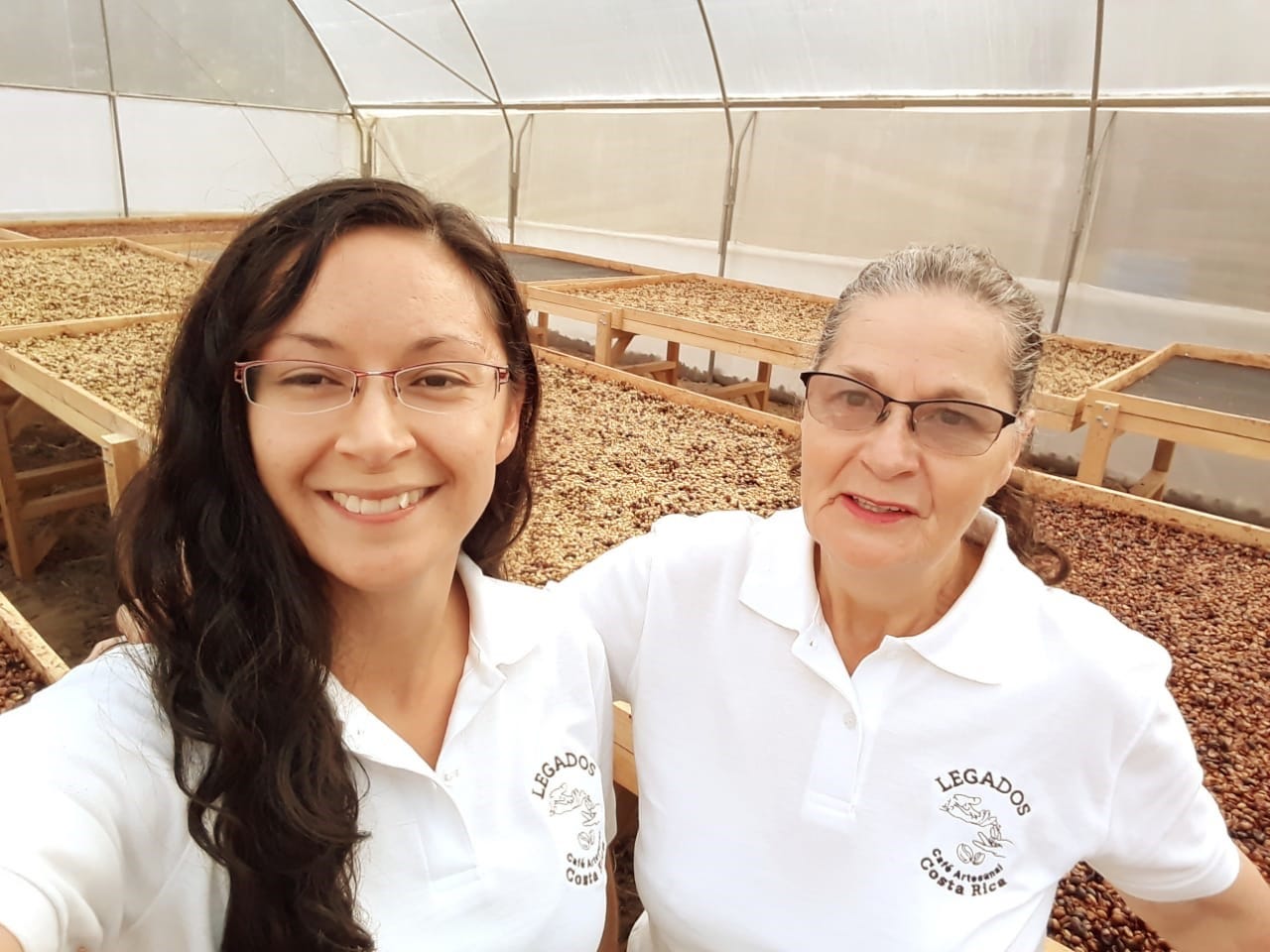 Leda is remarkably self-aware about the duality of her role - not just as the traditional homemaker she’s always been, but also a successful business owner. She made the point that for many womxn who have worked on farms, much of their work can be thankless. “Obviously not forgetting what I have to do at home in addition, you know? It’s a double-burden! There’s always work to be done at home.”

It’s refreshing and encouraging to watch these two womxn negotiate their identities in an environment that doesn’t accommodate their growing independence and resourcefulness. Taty mentioned her discomfort at the masculine agricultural environment she was plunged into after leaving university. She said that age and experience often play into her experiences of being undermined.

“As an agronomist I have worked mainly with men,” she says. “At first they doubt my ability to be a woman and, in some cases, it gets complicated when they are much older than me.”

Sometimes these dynamics aren’t restricted to clients she trades with, but to workers on her own farm as well. “When the coffee plantation was [my responsibility], the harvesters were very surprised to see that I was the owner. They always asked me about the true owner and expected to see some male figure,” she said, laughing. “When I started delivering coffee in the hall, people were surprised and asked my harvesters who their coffee [belonged to], because they didn't think it was mine. On other occasions, when a cousin or my boyfriend has accompanied me to buy tools or equipment for the farm, the vendors turn to them and not to me.”

In moments like this, Taty and Leda mainly have each other for reassurance and encouragement. “Taty, my daughter is so courageous. She’s brave,” Leda says. “She told me, mom, you know, I have thought about what dad would have wanted us to do. We can help realize our dad’s dream. With limited economic resources, it may be hard, but slowly but surely we will achieve it.”

“My mom inspires me,” Taty says of her mother in return. “Despite her age she is very active and loves to do all the work possible within the farm. She supports me and always tells me that I am able to achieve great things. It infects me with its positivity and that definitely drives me to continue.” 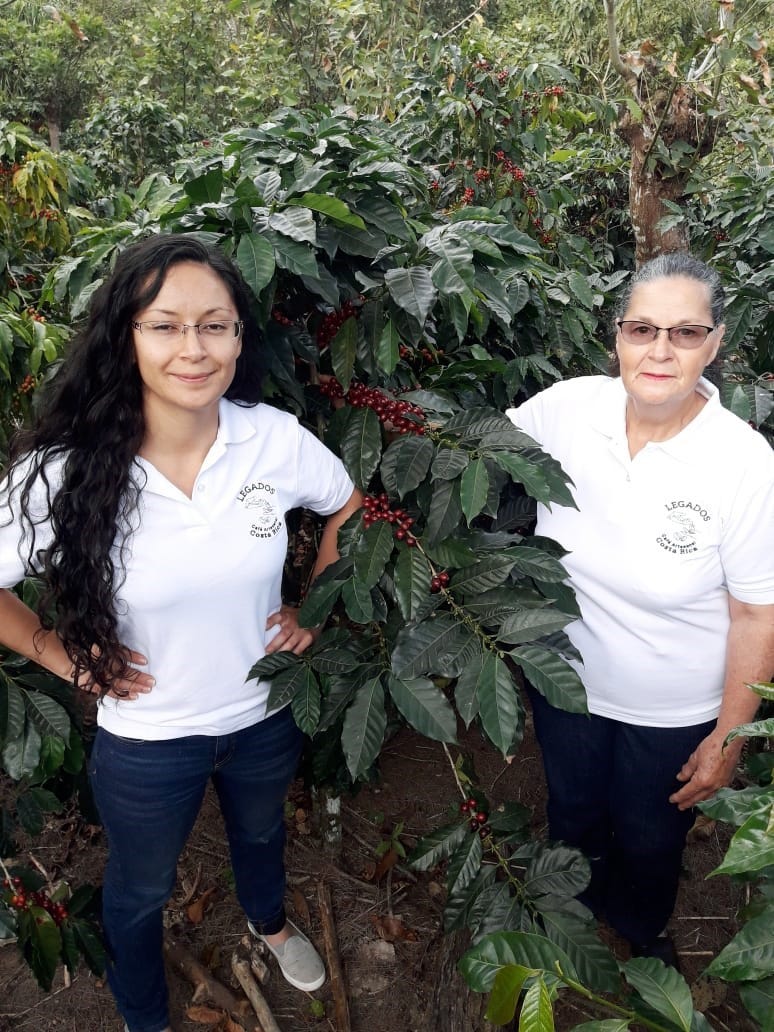 Why is it so crucial, then, that producers like Taty and Leda are pivotal in ensuring the future of our industry? Why is it important that womxn across the producing world receive recognition, not just for their efforts to ‘balance their work and personal lives,’ but to transcend that and strike out however they choose?

It is because womxn can become economic contributors to their families, their communities and their industries. They can become role models for future leaders of their industry by achieving financial independence and having greater decision-making power in their personal lives. And by inspiring the next generation of growers, coffee as a crop for the global market will be sustained for the future.

When asked her thoughts about her hard-earned success in the coffee sector in Tobosi, Taty is optimistic, but still thinks there’s more work to be done. “I am glad not to follow stereotypes and to show society that women have much to contribute,” she said. “I am the first woman in charge of the farm, with slightly more innovative ideas, and I like to feel that I can develop in the coffee industry, which for years has been a land dominated by men. I think that little by little the macho mentality has been changing, because many women have managed to demonstrate that we can excel in any area. However, we must continue working to break through all these barriers.”

Leda is of a similar opinion, and maintains that for social sustainability in coffee to stick, it needs to be a collective effort. “To me it looks like [to have change], all the women have to do it. To change, is not to stay at home but start helping your husband, brother, and that’s when it really starts. Or, have your own business even if it’s tiny! It doesn’t have to be coffee, but clothes-making or anything.”

And, in its own way, the encouraging thing is that social sustainability can start small - even from something as small - and personal - as the desire to continue the passion project of a loved one. “During the development of this project I have realized that I am a strong woman… I have learned to trust more in my abilities and that I must continue to improve every day,” Taty said. “Coffee gave me the peace I needed to face my dad's death and understand that the people we love never leave, while we remember them and share their legacies.”

Apart from her full-time job as Alpro UK's Coffee Specialist, Sierra Wen Xin Yeo has her fingers in several pies. Along with founding The Kore Directive, a womxn's coffee professional network and events company based in London in 2018, she also writes in her spare time for coffee publications, which include or have included Perfect Daily Grind, Caffeine Magazine in London, and Barista Magazine among others. Sierra is also certified as a licensed Q-grader.
Related Articles