Proud Mary Chills Out - Why Nolan Hirte is Freezing Everything 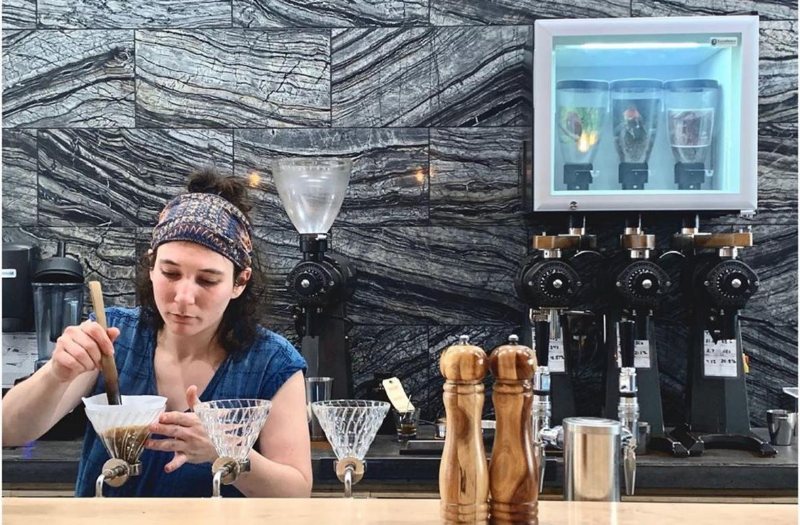 Freezing is hot right now! Once taboo in specialty coffee, the humble freezer is fast gaining acceptance as a viable tool for extending coffee’s shelf life. Properly sealed and stored coffee - both green and roasted - can last for years when frozen. Another reason for freezing? When introduced at the right stage, it can improve flavor quality.

In 2016, this freezing phenomenon was the subject of published study. UK roaster Colonna and Smalls reported their finding in Science Reports that coffee beans fracture into more uniform particles when ground in a frozen state. More even particle size means more even extraction, thus a tastier brew. A year later, Kyle Ramage won the United States Barista Championship using coffee ground while frozen.

But what if a coffee company were to freeze coffee at all three of these stages - green, roasted, and in the grinder? Proud Mary Coffee, based in Portland, OR and Melbourne, AUS, is pioneering a new program that does just that. They store choice lots of green coffee frozen, along with all the roasted coffee for their cafe, and in late 2019 they introduced custom-built frozen hoppers at their Portland location.

Hold on, you might think. This seems like a lot of work. Turns out, the benefits extend far beyond what we see on the surface. 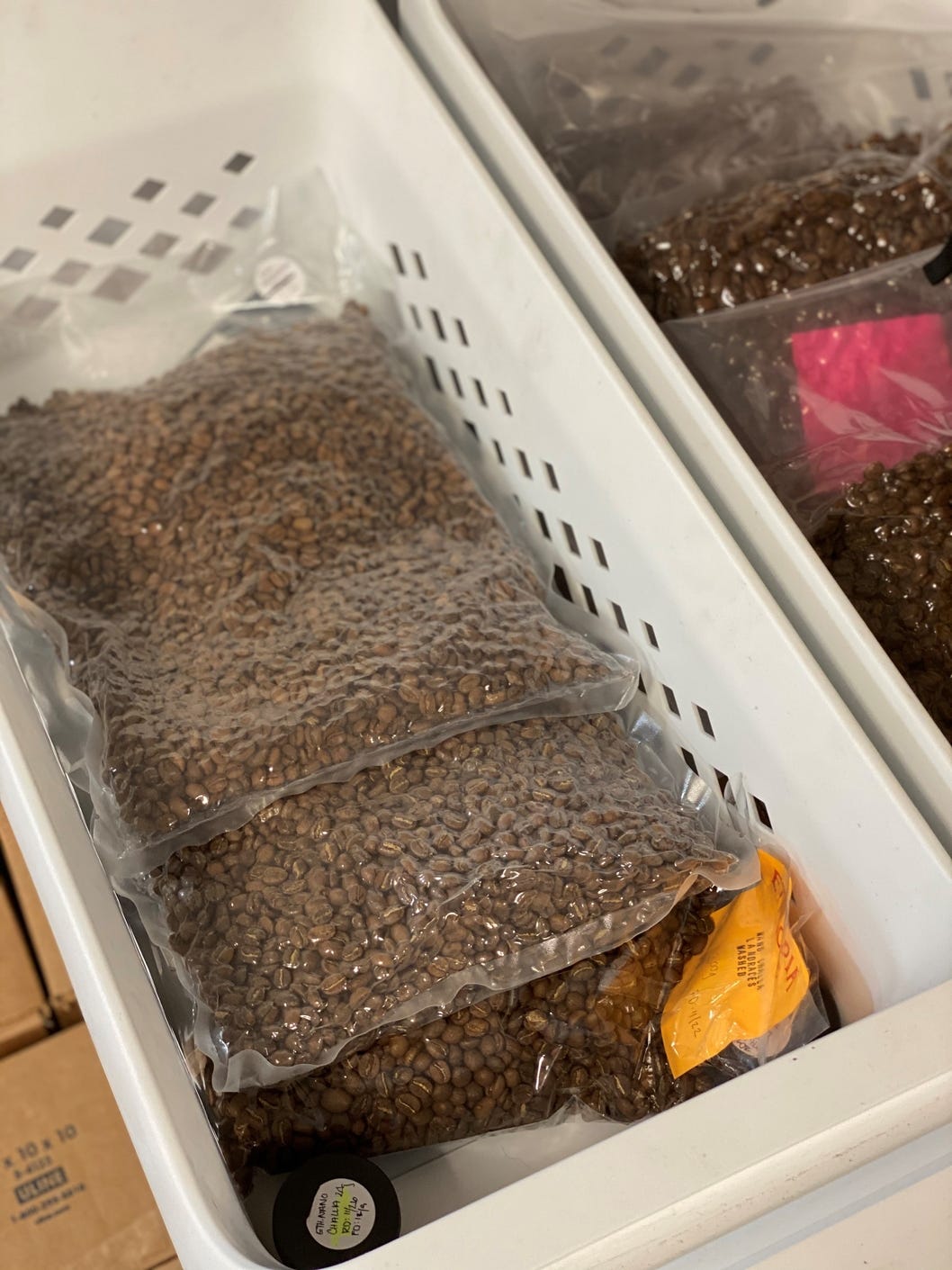 For Nolan Hirte, Founder and Owner of Proud Mary, it started with a 2019 trip to Burundi for Cup of Excellence. During his trip Nolan met Rachel Apple, Quality Control Manager at George Howell Coffee in Boston, MA. Since 2001, George Howell has frozen all their green coffee immediately upon receipt.

“We don’t encounter any waste of green coffee - ever,” says Rachel. Freezing halts the aging process, so stale green is never an issue. “And it’s the best possible representation of that farmer or co-op’s work,” Rachel continues. “Instead of letting the masterpiece of their crop age out and lose its terroir and nuance, we capture it by freezing thereby allowing our customers to experience that as well.”

The specialty coffee industry hasn’t always held freezing in positive regard, largely due to lack of exposure and information. Tom Finch, founder of Manchester Coffee Archive, a coffee-freezing project in the UK, still hears reservations from time to time.

“Some people are concerned about moisture forming on the beans when they are removed from the freezer, but that doesn’t seem to happen,” says Tom.

Other common concerns include worries about freezer burn and general quality impacts. Nolan had reservations at first, but his conversations with Rachel assuaged these fears. After talking with Rachel, Nolan says, “I could see there was no reason to be scared. So we decided to just freeze everything.”

Nolan got to work right away at Proud Mary in Portland, OR. He started freezing special lots of green coffee, using a vacuum sealer and standard chest freezers. But for the remaining coffee, he implemented freezing post-roast instead of before.

“Let’s say we’ve just got a bag of green coffee in, a 70-kilo bag,” Nolan explains. “We dial in our favorite roast profile, then we roast the whole bag all in one day. We blend all those roasts into one cohesive batch of coffee. We age it out for nine days. Then we vacuum seal it in one-kilo bricks and stick it in chest freezers.”

If this seems far-out, let’s take a step back and look at how things are usually done.

Any barista can attest to the stress of espresso preparation. Even tiny environmental shifts are magnified a hundredfold. The slightest grind change can render espresso undrinkable. Many cafe protocols dictate that shots even a speck off spec - a second too slow, a gram too light - must be dumped.

“As a barista,” says Nolan, “There’s so many variables you have to deal with. The humidity, the temperature going from a cold morning to a hot day.” Coffee beans become more malleable as they warm which changes how they fracture, resulting in a need for constant grinder adjustment.

“And every day you show up to work, the coffee’s at a different age,” says Nolan. In espresso, a coffee five days off roast functions totally differently from the same coffee seven days off. Switching between different roast dates, baristas must dial in totally from scratch. To top it off, says Nolan, “There’s no way that those roast profiles are all the same because the green is eternally aging.”

Additionally, many cafes experience staggering amounts of coffee waste. Coffee beans that are not used soon enough age into an unserveable range. If there’s no other use for the coffee, it’s thrown out. From this perspective, Proud Mary’s system doesn’t seem strange anymore.

“Now just imagine,” says Nolan, “A world where you’ve got a month’s worth of roasted coffee locked in time and it’s all the same roast. It’s all the same age. And it’s not getting older.”

“Then you put the coffee in a frozen hopper,” says Nolan, “And it doesn’t change temperature at all.” 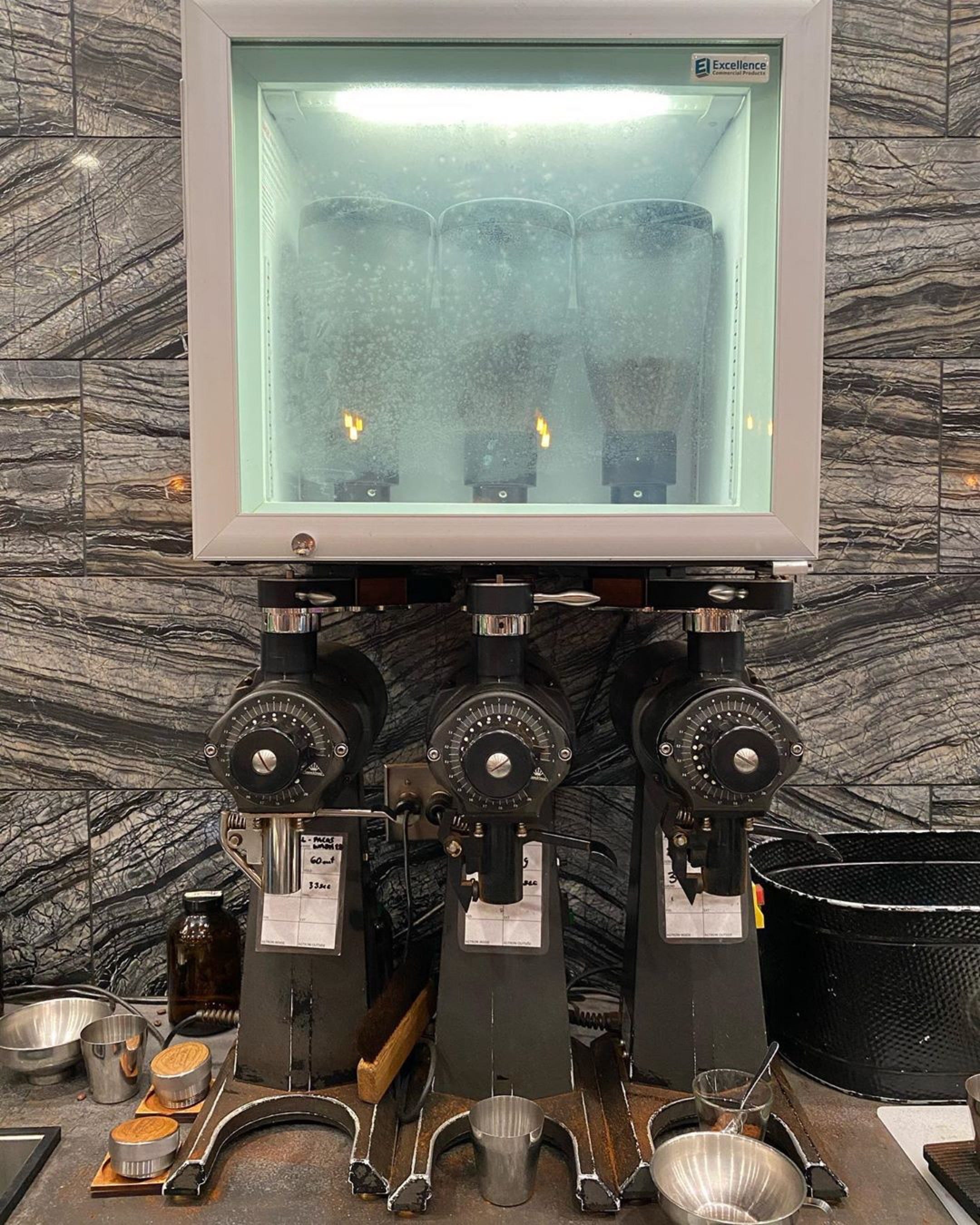 Upon his return from Burundi, Nolan started drilling holes in freezers. All the coffee had to be frozen, and this meant coffee in the grinder, too. “I thought I’d have to create a hopper that had liquid nitrogen or dry ice and that would be so dangerous.”

“Then I thought, what if we took a freezer, stuck it in the wall, cut some f------ holes in it, set the grinders under it and dosed just straight from the freezer. And it sounded just ridiculous.”

Nolan bought a glass-front freezer and promptly ruined it. He bought another and ruined that one too. But he finally found success on the third. The result? A showstopping, functional art piece that keeps customers engaged and curious. It also keeps three slim hoppers full of coffee at freezing temperature.

The hoppers connect to custom dosers that dispense one shot’s worth of coffee at a time into the grinder. There is never even a single bean kept out of freezing temperature.

When baristas add more coffee to the hopper, it’s a one-kilo brick coming directly from another freezer - so it’s the same temperature. It’s also the same roast profile, the same green coffee age, and it’s all nine days off roast.

“You can dial it in and just stay dialed in for days,” says Nolan. “You don’t have to make all those adjustments.” And needless to say, there’s zero coffee waste due to staling.

Adding to this are the flavor benefits from grinding frozen coffee. Proud Mary’s espresso has markedly improved in clarity, sweetness, and overall flavor. Because the coffee shatters into more even particles, it can be brewed at higher extractions - meaning, more flavor solids are dissolved from the coffee - without bitterness.

“The extraction goes up a lot more easily and we have more room to change parameters,” says Nolan. Customers noticed the flavor difference right away. “Our baristas in Melbourne were not sure about the idea at first. But since installing it we have had nothing but positive feedback. Customers really love inquiring about it and engage in conversation.”

Increased extraction also means increased efficiency, as less coffee grounds are needed to brew a coffee of the same strength. This efficiency, which is calculated using a simple math equation and an instrument called a refractometer, can dramatically lower operating costs.

“But for me,” says Nolan, “It’s the repeatability and consistency of a product that’s all over the place normally. Now anytime I show up I actually know it will be in the pocket.”

Coffee freezing has plenty of naysayers, but Proud Mary is unphased. Nolan continues his experiments, with ideas in the works for an airtight hopper and eco-friendly alternatives to plastic vac bags. Meanwhile, he hopes that more cafes will start freezing coffee, in any form, and consumers will catch on too.

“I wasted a lot of coffee before I started freezing it at home,” he explains. “I used to have coffee get old and I’d just throw it away. Now I have a freezer full of all these little glass jars of different coffees. That should be accessible for everyone and not just for us coffee nerds.”

Most importantly, Nolan is motivated to keep learning. “It’s really important to have fun with coffee,” he says. “I could be totally wrong and that’s ok. We’re not trying to claim we’ve solved everything. We’re just saying, ‘Hey, there’s more!’”

Umeko Motoyoshi is an award-winning coffee writer and educator. A licensed Q-Grader with fourteen years of experience, they founded coffee sustainability platform @wastingcoffee and authored the book Not Wasting Coffee. Umeko is also founder of Umeshiso.com, an online coffee supply shop specializing in rainbow cupping spoons. Umeko’s mission is to make coffee accessible, empowering, and welcoming for people of all backgrounds and identities.
Related Articles