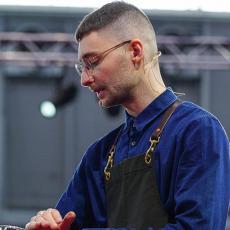 "I would have said Cafiza in the past, but since we’ve discovered how amazing Grindz actually is, I will say Grindz. I used to think that if you are not taking your grinder apart at least every 10-15kg, you can’t call yourself a good barsita. Since we’ve started using Grindz, we manually clean our grinders waaaay less. So much time saved!" 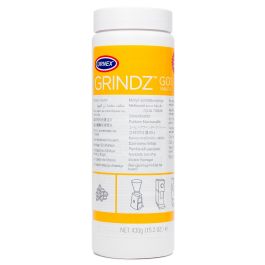 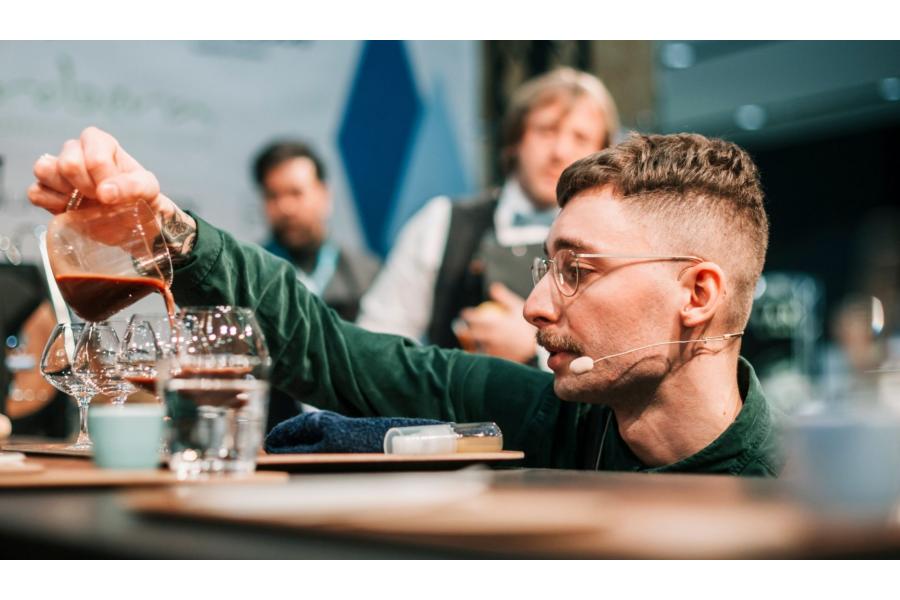 I am the Head Roaster and Roastery Manager at Five Elephant Coffee Roastery in Berlin.

It was 2013, and I was studying math at the time. I had an internship in the risk management department of a bank during the summer, after which I realised it wasn’t really suitable for me. I was giving private math lessons as a side-job and was working at a skate shop over the weekends. I just decided to look for something different, maybe in gastronomy. I didn’t even drink coffee at the time. I just left my CV’s in the places I thought it would be nice to work at. I still don’t really know how it happened, but I was hired at one of the best specialty coffee shops in Warsaw. They showed me that coffee can taste good, and that it’s complex and fun! If I would have gotten a job somewhere else, I probably still wouldn’t even drink coffee!

Ever since I can remember, I was competing in a lot of different competitions. Math, swimming, snowboarding - whatever I was doing and whenever there was an option - I wanted to compete. In general I think that we - Polish people - are really competitive.

Most of the baristas from my first coffee job were competing, so it felt natural for me to compete as well. At first there were some latte art battles. But I knew from the start that latte art is not really about coffee, so I signed up for Brewers Cup. I was only a barista for around six months. I had no idea what Brewers Cup was. I hadn’t even seen any coffee presentations before. But I just went for it. This was a year in Poland where the first round only had a compulsory round, so I ended up in the final. I didn’t even have coffee for the open round and the finals were a day after...

”Wojti - you still have a lot to learn”.

First of all: it’s easier to roast good quality coffees than bad quality coffees. Same with brewing good coffee and bad coffee. It’s important to understand that. Second: Quality Control is the key. Make sure that the coffees you want to evaluate are on point with extraction. Dial it in. There is nothing worse than making roasting decisions based on under- or over-brewed cupping. Use scales and measure extractions.

How far in advance did you start training for WBC? How many hours a week do you train?

My training started around 2 months in advance, and trained around 10-15 hours a week. I have a full time job and a family so it was hard to focus only on WBC. But I did my best to find a good balance between the three.

As a roaster I have easier access to amazing coffees. I buy some of our green beans, so when competition season is coming I can always push for something I would like to use. Having the right coffee has a huge impact on your points in the end. Then I have all of the contact information of the producers. I’ve Skype-ed a few times with the farmers. I’m not saying you can’t have it as a barista, but it is just easier for me as a roaster.

I can also really decide when the coffee tastes exactly how I want it to taste, I don’t need to ask again and again to try something new. After being a barista myself, I know how hard it is to be one. I know how hard coffee can be to dial in. That’s why I decided to roast coffees that are a bit more user-friendly. My goal is to always look for sweetness. I try to consult all of our roasts with our whole team of baristas.

I would have said Cafiza in the past, but since we’ve discovered how amazing Grindz actually is, I will say Grindz. I used to think that if you are not taking your grinder apart at least every 10-15kg, you can’t call yourself a good barsita. Since we’ve started using Grindz, we manually clean our grinders waaaay less. So much time saved!

Filter coffee for me please. I love espresso but it’s so hard to maintain during the day.

What is the funniest or most memorable moment you have experienced behind the bar?

In the cafe I used to work at we used to clean milk fridges every week in the morning. So we were pulling all of the milk bags out, cleaning the fridge and putting the bags back in. The fridge was under the counter so I was squatting. I didn’t realize that one bag was open and I grabbed it, only to realize that I’m covered in 1l of fresh milk (starting from the top of my head), in the beggining of my shift. That was one stinky day for me.

It’s not so often that I brew coffee at home, to be honest. Only over the weekends and then I’d rather go somewhere for coffee. If I brew it’s with Aeropress or a Moccamaster.

What is unique about coffee culture in your country?

Poland: I’m always impressed that so many people are into coffee. Specialty coffee is pretty expensive if you were to compare average wages in Poland to Germany, where the prices of coffees in the shops are pretty much the same.

Germany: I feel like the Berlin coffee scene is growing really fast, but the rest of the country feels a bit slower.

I used to skate a lot. Since I’ve moved to Berlin, I don’t do it so often anymore. However recently I’m slowly getting back to where I was a few years back. I hope.

Where do you see yourself in five years?

The plan was to open my own place, but that’s changed now. At the moment I’m happy where I am and I hope that as the company (Five Elephant) grows, I can still develop myself more. So far it’s been working for me. Coffee Roasting Champs and Coffee Masters are on my to do list as well, but one thing at a time.