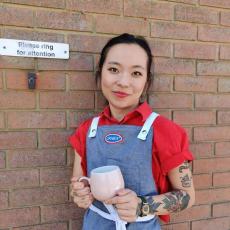 "Cafiza. A steadfast companion throughout my barista years, so much so that it became a noun! - 'Hey, have you Cafiza’ed those portafilters yet?'”

You just moved to Switzerland from the UK! Tell us what your plans are for Zurich?

I really wanted a change of pace for this season of my life, which in the land of beautiful mountains, rivers, and cheese fondue is pretty achievable! It also has a small but world-class coffee scene and I wanted to bring what I’ve learned and developed in the United Kingdom to help further the next coffee scene I become a part of, especially with regards to increased accessibility, the future-proofing of coffee through sustainability, and DEI in coffee.

Completely by accident. I needed a way to pay my rent while doing a bachelors' in university, so I landed a FOH job in a dinky deli cafe in York where I was living at the time. One thing led to another, and when I gradutated I realised I wanted to keep working in coffee. That choice certainly wasn't without its systemic and cultural challenges, and there were definitely moments I wanted to walk away from coffee, but I'm glad I stuck with it.

You are a killer emcee! How did you get into emcee-ing and what type of prep do you typically do leading up to an event?

Thank you! Again, completely by accident! It started with bits of public speaking here and there, and hosting shows, or guesting on podcasts. I started emceeing with The Barista League in Oslo, and then for TBL:Online; but being catapulted into emceeing for international events really started with hosting Coffee Masters London by Allegra Events, at London Coffee Festival.

I actually chickened out of competing in that competition that year (I had a deferred competitor’s slot for Coffee Masters in 2021), but wanted to continue my involvement onstage to represent the company I was working for at the time, who was a main sponsor. I ended up being a great fit for that - and one thing led to another, and I ended up emceeing for the World Coffee Championships 2021 that same year at HOST Milano, and the rest is history!

People don’t believe me when I tell them that I actively dissociate when I’m onstage, ha! I slip into that weird zone where I’m tuning everybody out, except the people I’m interacting with on stage (judges, competitors….) As a result, I avoid getting nerves! Also, being yourself onstage is key - I don’t make jokes you wouldn’t hear me crack in person, I cackle exactly the same as I would offstage… it helps my audience to connect with me as a real person instead of a contrived stage persona.

What led you to compete in the UK Brewer’s Cup this year?

Honestly? I wanted to see if I was truly as good at making coffee as I believed I was, and if not, whether I could be better. I used to disparage people who competed, because I didn’t believe it was the most diverse, equitable or accessible structure to award value to coffee professionals in the industry, but I knew I couldn’t knock it until I’d actually tried to compete myself. I also wanted to see if it would add value or validate what I had already accomplished in my career in coffee, or if it would make no difference.

My partner, Matt (WBrC21 Champion), and good friends Lisa-Laura (UKBrC18 champion), Roosa (Finnish CTC18 Champion), and Claire (the new UKBC22 Champion) were a big influence in my saying yes. They ended up being part of the team that was crucial to me winning the Cup this year.

You are a superb writer. Did you find your writing skills to be helpful when developing your script for competition?

I actually found it counter-productive! My coaches were merciless when it came to shaving down my flowery script. Less is more, and I only had 10min to get my main points across, so in the end, my original script was reworked until only the essentials were left.

Are there any bagel shops in Zurich that sell everything bagels?

HAHA!! What a great inside joke. For those who follow my Instagram or know me in person, I am obsessed with the Everything bagels in New York. I think I had two every day the last time I was there. Unfortunately Zurich is missing out on this bagel action. Maybe I should start a bagel shop that also serves delicious coffee.

What are your 3 favorite coffee-related social media accounts?

@wendeliendrinkscoffee - for the reels
@50percentarabica - for the memes
@bossbaristapodcast - for the anti-capitalism, collective social action, and worker’s rights

Cafiza. A steadfast companion throughout my barista years, so much so that it became a noun! - "Hey, have you cafiza'ed those portafilters yet?"

Filter coffee! I used to be a strictly-washed-coffee gal, but since competing and tasting so many spectacular “neo-natural” coffees (that’s not actually a term, I call it that in my head to refer to those naturals that are so clean you wouldn’t believe it), I’m swinging back to that side of the processing spectrum again.

In the summer - a flash drip filter over ice, please!

So many to choose from! I've been having tons of fun with the Orea recently. Its fast flow and flat bottom means I can balance extracting what I want from my coffees (acidity and sweetness) with a syrupy, medium-weight body.

You're originally from Singapore, have lived in the UK and now live in Switzerland. How is coffee culture different in each of these countries?

They couldn’t be more different. I grew up on traditional Singaporean, or Nanyang (South Ocean) coffee, which is torrefacto-style roasted robusta (with margarine and sugar), extracted to within an inch of its life in a sock filter, and diluted with any combination of sugar, condensed or evaporated milk, and/or ice or hot water. I still drink it when I go home; it’s just a different occasion, and there exists a new generation of baristas in Singapore learning to keep our coffee traditions alive. However, there’s also a thriving specialty scene with some talented specialty coffee academies, roasters and cafes there, and I can’t wait to visit again.

In the UK, especially in cities like Manchester and London where I was based, there are pretty established specialty coffees scenes, but the large majority of coffee drinkers tend to consume large milk-based beverages, owing in part to large commercial coffee chains that both cater to and reinforce the abovementioned existing coffee culture. There’s a shift happening though (and has been happening for years) towards specialty, and more and more people have access to good-quality specialty coffee at home or in cafes. If there’s one good thing to come out of the pandemic for the industry, it’s that it’s certainly helped to build and bolster consumer retail.

In Switzerland, the specialty scene is concentrated, but world-class, and is quickly finding a place on the world map for its excellent coffee. It’s produced two World Brewers Champions in the last 5 years alone! It helps also that Zurich, where I’m based, is an incredibly international city, so there’s an influx both of good coffee and great coffee professionals often enough. I have been told of the staple that is cafe creme in the Swiss mountains, though, whether for its fame or notoriety - an espresso-based drink extracted at incredibly high pressures (15-20bar) on either semi-or-fully automatic machines! It’s got more in common with a lungo than an americano, but even that’s a bit of a stretch! I’ve yet to try it for myself so I won’t knock it just yet…

What is one country or region you have not traveled to, but would like to?

Venice! Before it sinks into the sea...

I’m quite a homebody, so I craft and read a fair bit in my downtime, as well as doing some yoga. But now that I’ve just moved to a new city, I can't wait to try getting stuck in a new hobby! Watch this space for sure.